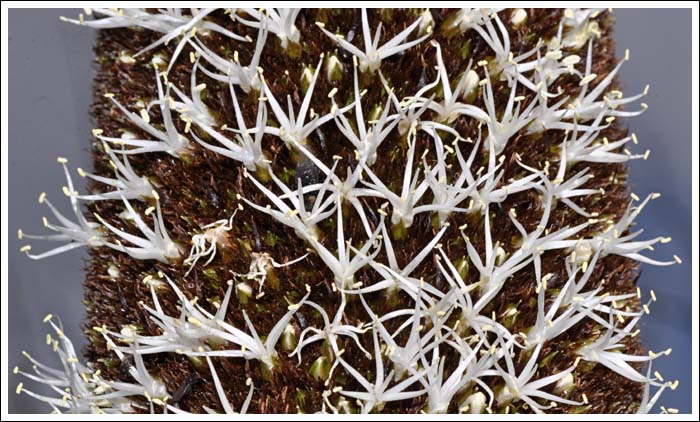 The flower spikes of the grass-tree are an important food resource for birds and insects.
On one spike ants and the odd  hoverfly were busy, the latter though eluded the camera. 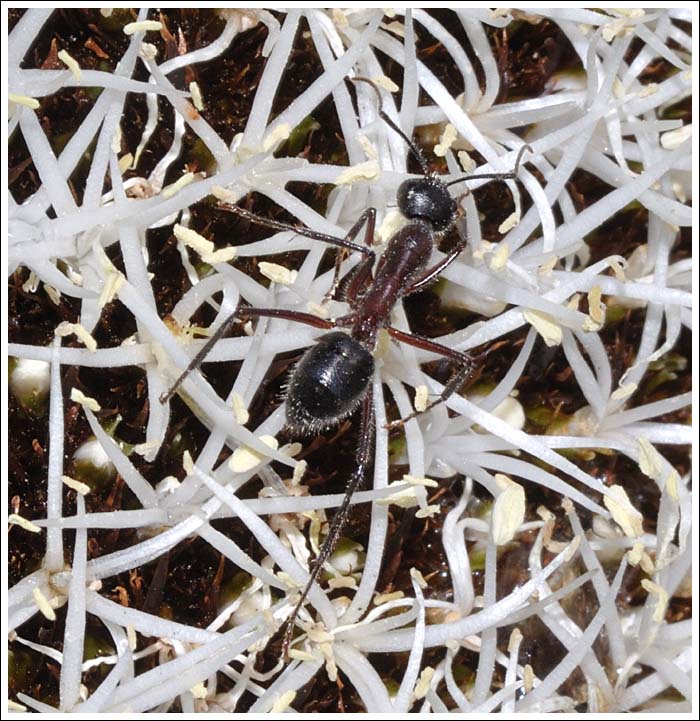 On one boundary of the park there is an area rich in terrestrial orchids. It had been burnt, but not as fiercely, bordering farmland it is possible that it had been a back burn to protect the farm. Orchid leaves were easy to find on the bare ground, 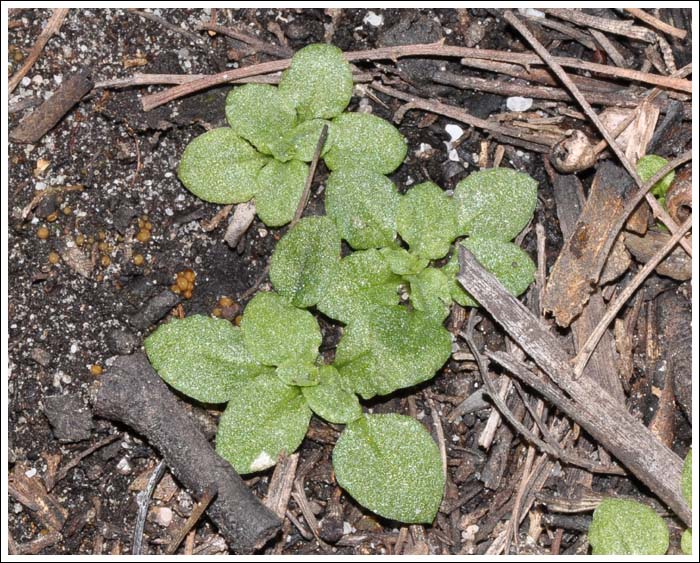 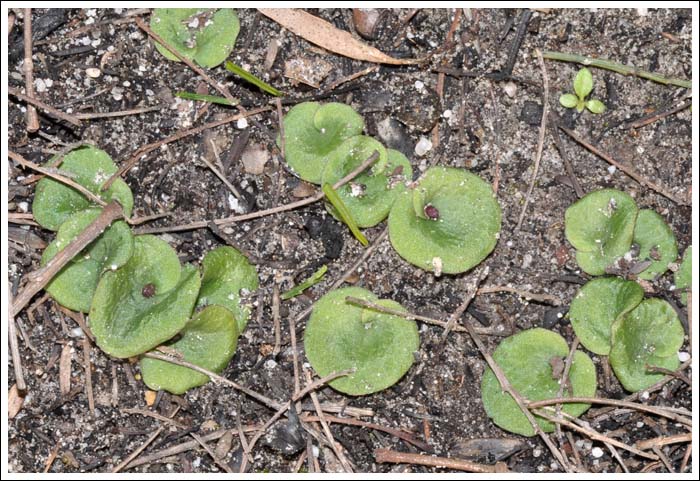 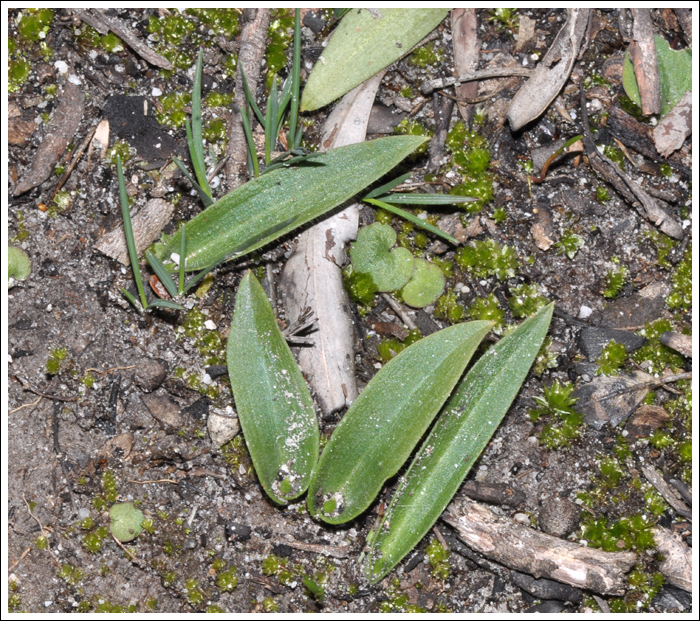 At this location Pterostylis striata and Pterostylis concinna grow together, and the named hybrid P. xToveyana also occurs. We found a good number of striata flowers, but concinna was just coming into bud, striata flowers from April to August, concinna from May to October. They are pollinated by fungus gnats, that, with other orchid pollinators are severely impacted by burning of the bush, causing a lack of pollination, diminution of seed, and the consequent fading away of orchid populations. 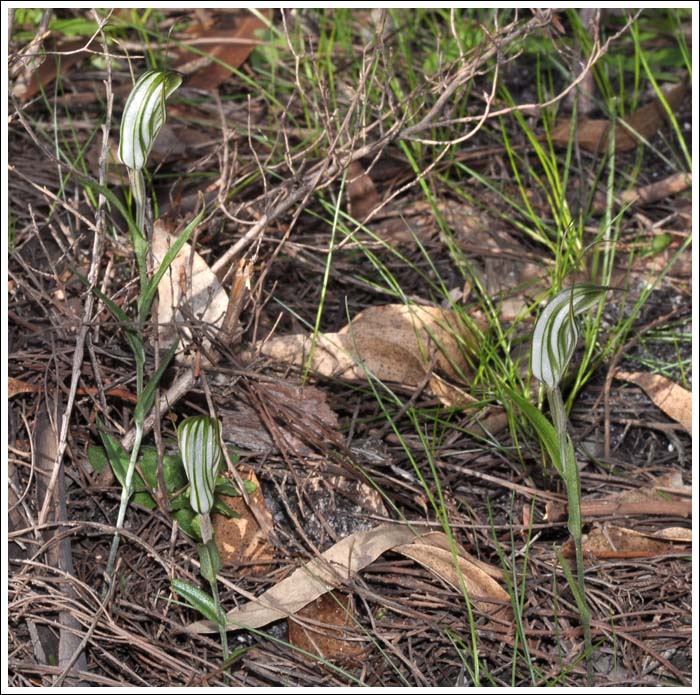 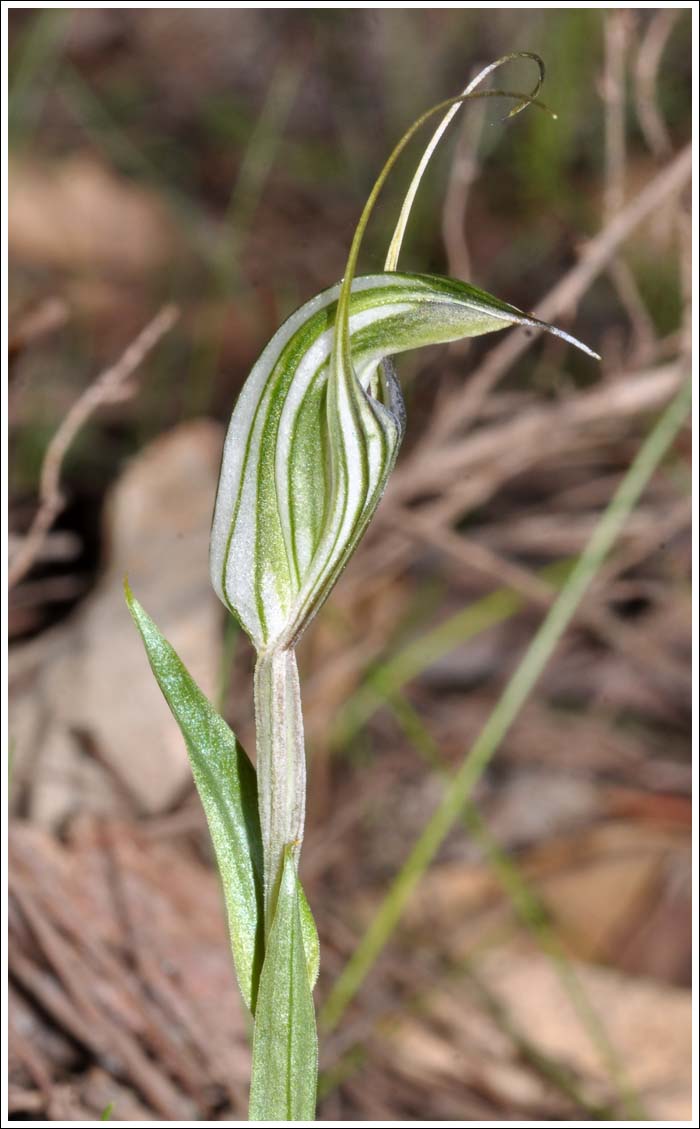 Many species of orchid are found living happily in the shelter of a log or tree, this tree for example was very much to the liking of striata. Click to enlarge. 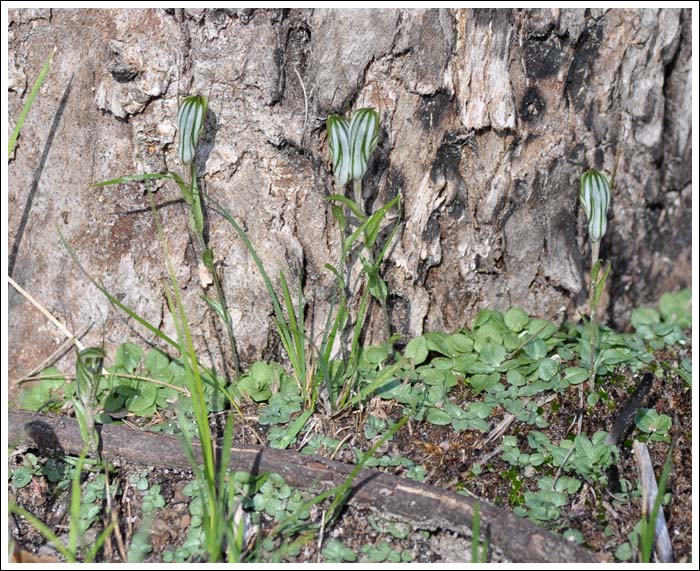 At the beginning of the year Holey Plains State Park was burnt by a huge fire, taking an enormous toll on flora and fauna, and six months later it was time for a visit to check on signs of recovery. It is anticipated that it will be the first of several as the seasons progress. Driving through the park six months after the fire, the overall impression gained is of blackened tree trunks rising from the bare sandy ground, due to the intensity of the fire that swept through at least eighty five per cent of the 10,638 hectare park. There has been little epicormic growth on the eucalypts, the lack of rainfall has probably contributed to the slowness of regrowth. This image shows Crooke Creek, formerly  densely vegetated and a haven for birds and other wildlife. Click to enlarge. 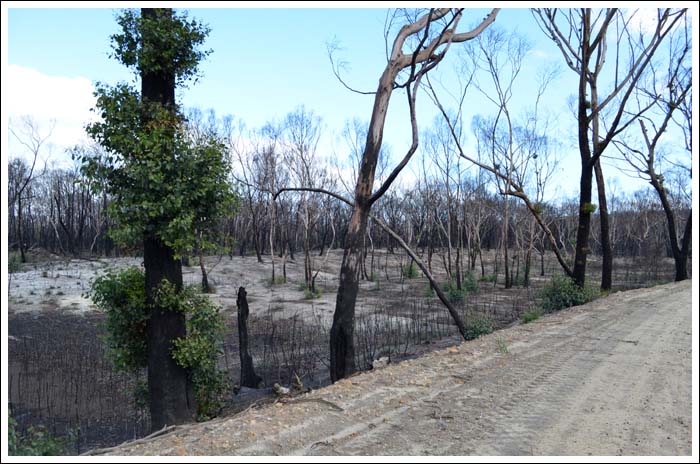 The first stop was at the main site for the Wellington Mint Bush, Prostanthera galbraithiae, where post fire, Parks has replaced the protective fencing. There was no sign of new plants of the mint germinating, but plants of Bossiaea cinerea, a Dillwynia species, Grevillea chrysophaea, and Acacia suaveolens were sprouting from underground root-stocks. Boronia anemonifolia that was abundant at the site is also yet to appear. Further on in banksia country, germination was taking place with small plants of B. serrata appearing. 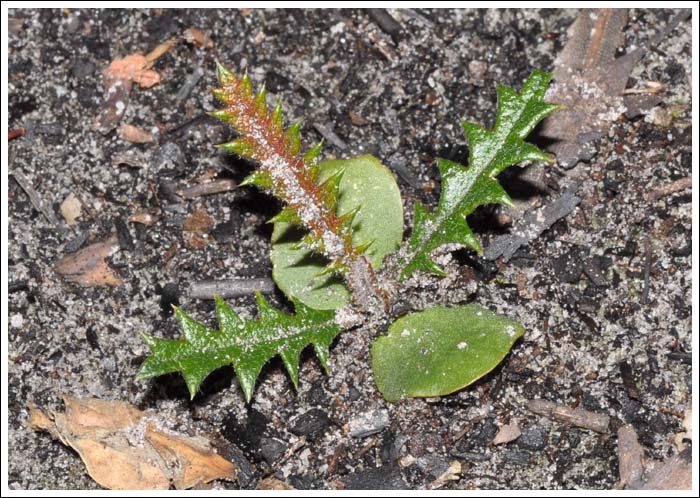 Lomandra was starting to show up here and there. 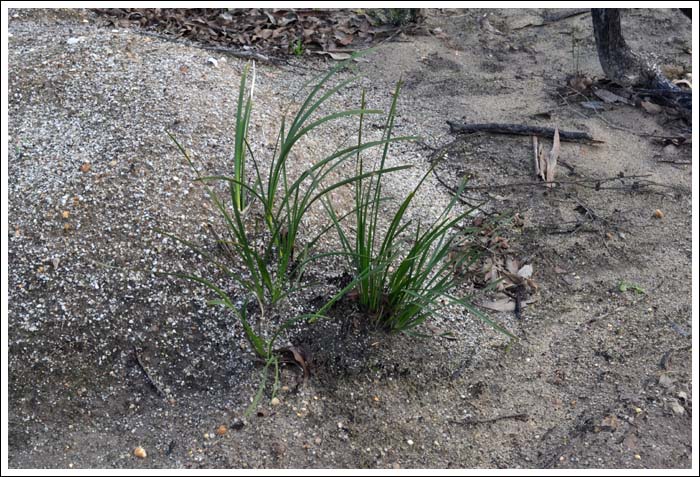 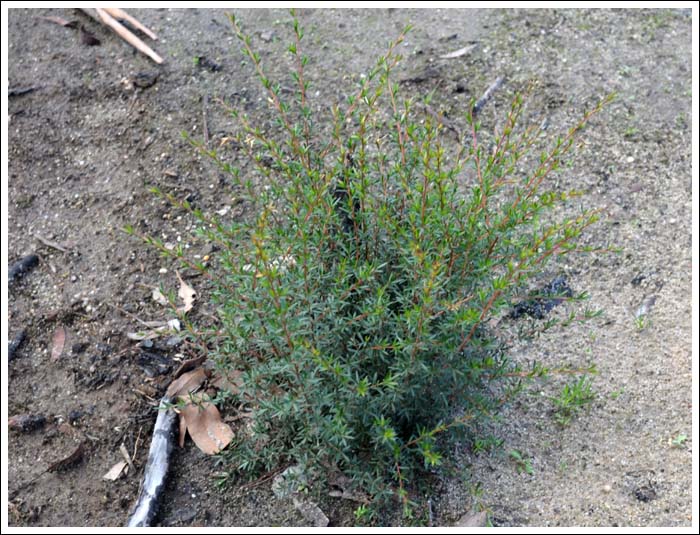 Less welcome to see though was bracken fern, which has had so much of a  smothering effect on many of the attractive plants for which Holey Plains used to be notable. 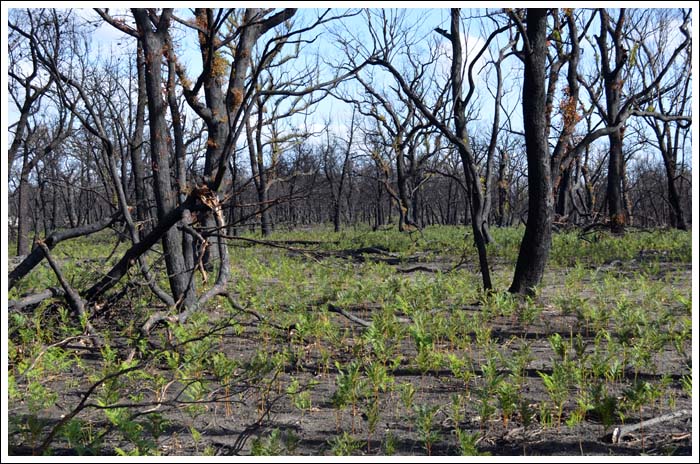 As can be imagined, fauna, both vertebrate and invertebrate was hard to find, but  happily, three black wallabies were seen, one in a small unburnt area, and two in the burnt area where a solitary emu was also present. Four Wedge-tailed Eagles were seen, but the only other birdlife noted in the burnt part of the park was a large flock of Crimson Rosellas.
A highlight of the park is the large number of Austral Grass-trees, Xanthorrhoea australis, so we were keen to see how the fire had affected them. They flower prolifically after a fire, and the following pictures tell the story, some images will enlarge with a click. 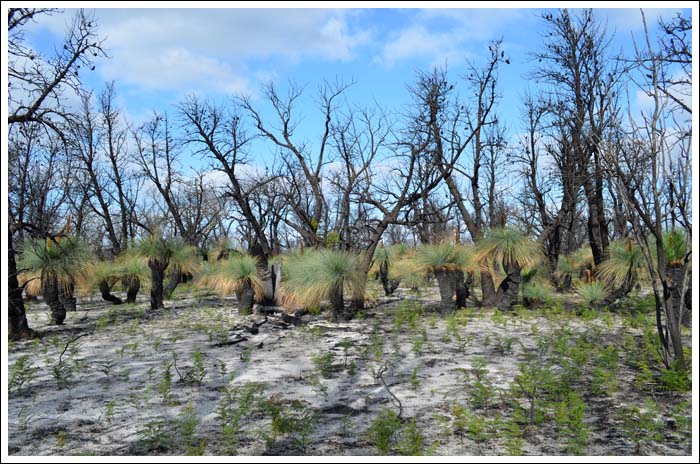 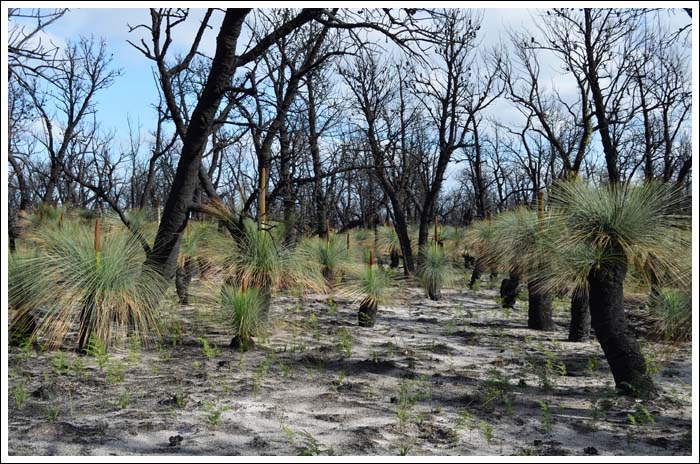 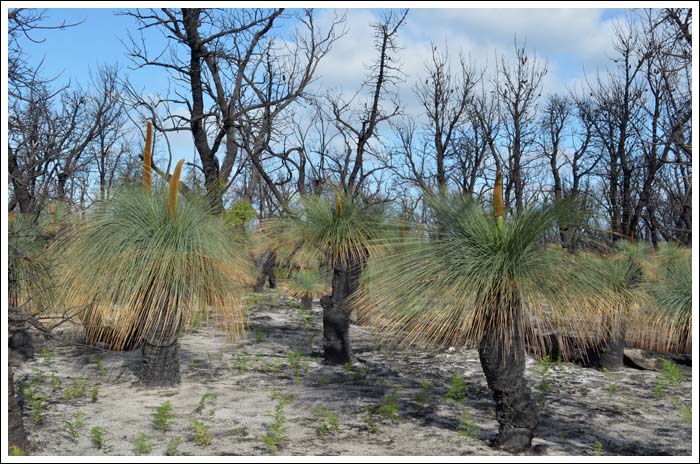 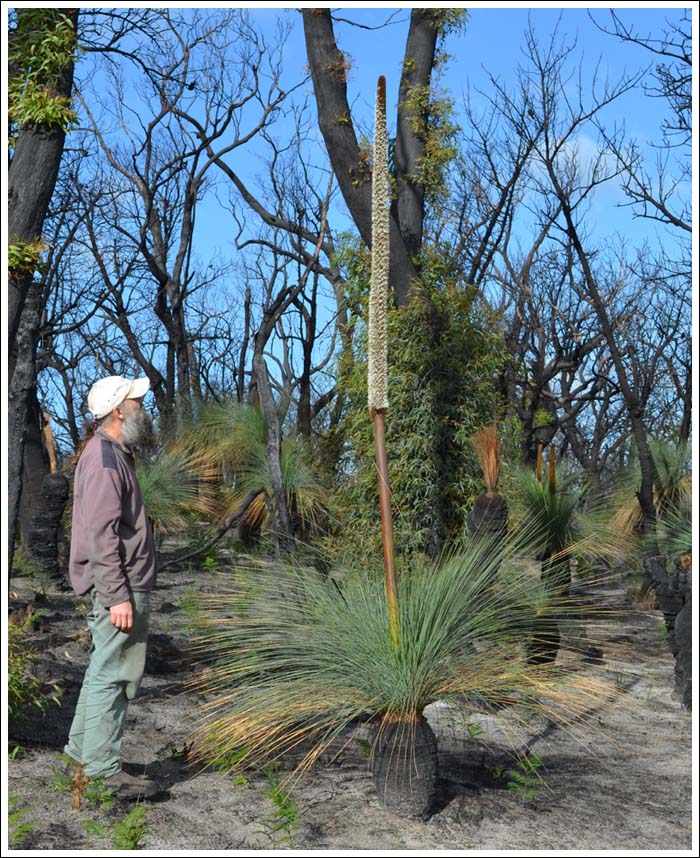 The beauty of the stem. 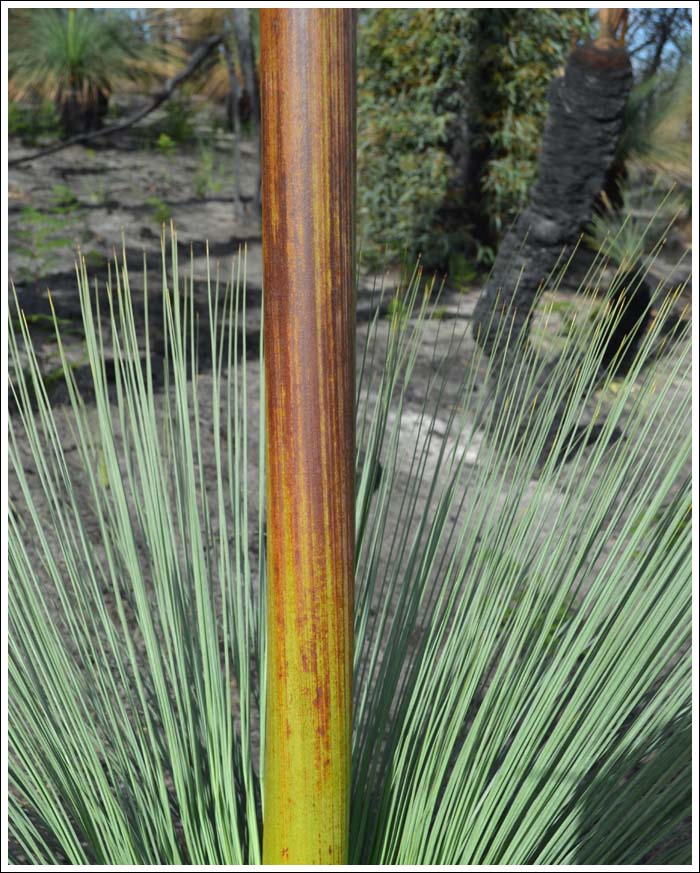 This specimen with a forked crown has ten flower spikes developing below two old spikes that escaped being burnt in the fire. Two are coming from one stem, seen below. 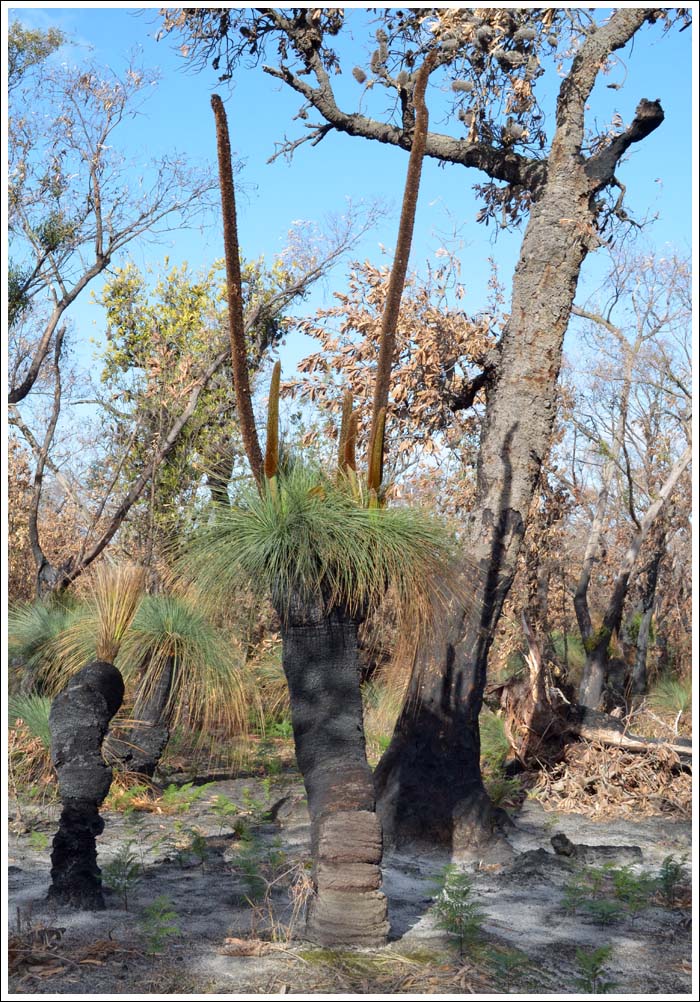 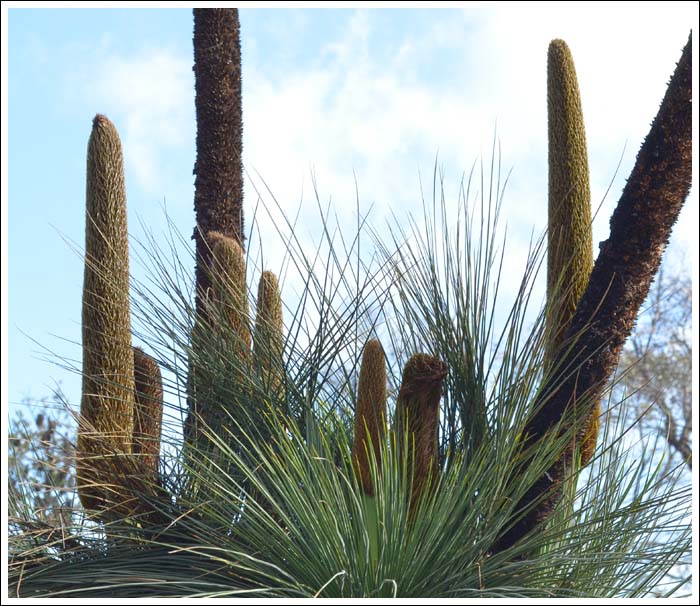 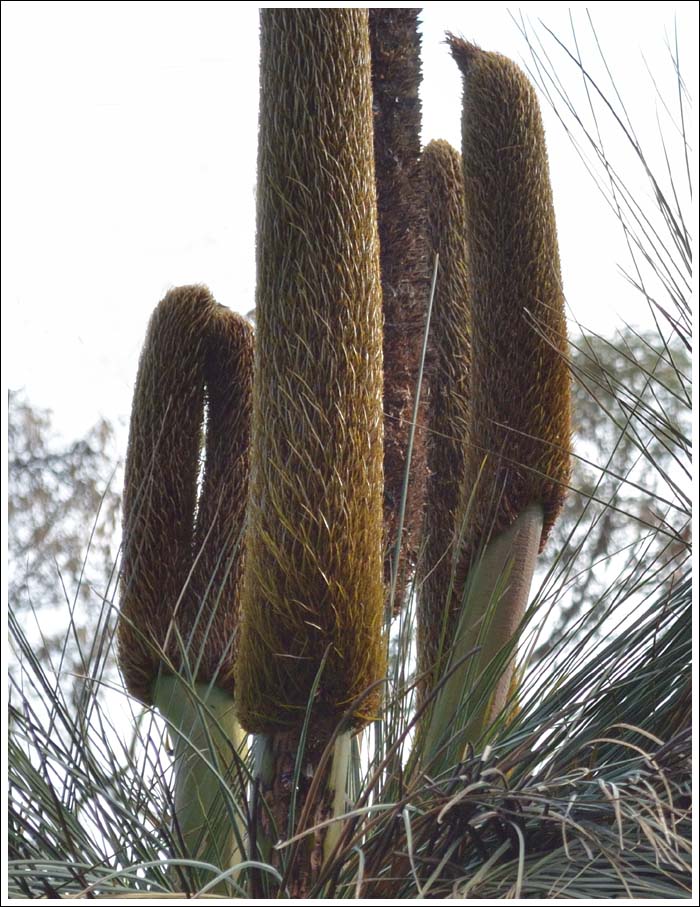