Every garden, native or otherwise should have at least one correa, species or cultivar, many of which are available from specialist nurseries. They are all loved by honeyeaters, and there are varieties suitable for shade and open sun, with some very drought hardy. The garden where the following correas were photographed is of over forty years duration, and two of the earliest plantings, Correa glabra in green and red forms are still thriving, the former spanning over three metres in width. Correa decumbens, planted at the same time is now gone, but continues to make its presence felt in hybrid seedlings. Clearview Giant was another early planting, with Correa alba, Marian’s Marvel, Dusky Bells, and over the years various others, including cutting grown plants of Correa reflexa forms from the wild. Those plantings have resulted in seedlings appearing that exhibit a delightful variety of colours and shapes, often germinating far from a likely parent.  One small plant, yet to flower, has just been discovered on the roadside verge more than fifty metres from the nearest garden bed. We have the pollinating honeyeaters, the Eastern Spinebill in particular to thank for all these seedlings. Here then are our present garden correas with some brief notes. 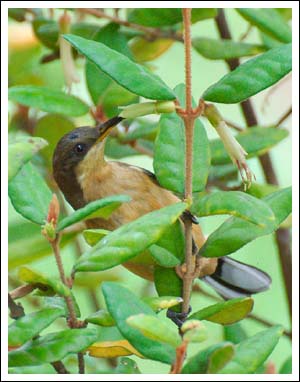 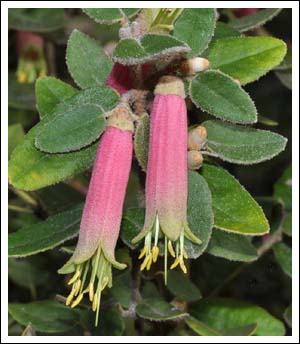 A recent seedling growing in the shade of an Avon River callistemon. 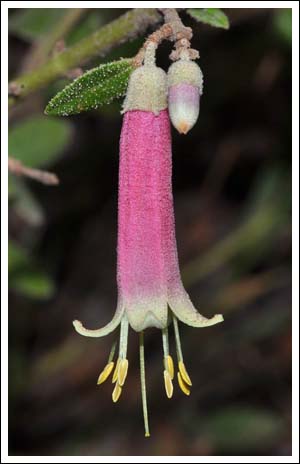 A very hardy and vigorous plant that germinated adjacent to where the decumbens once grew. 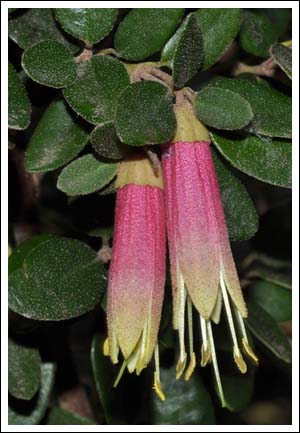 This elegant flower is on a plant that germinated at the base of a large Hakea purpurea, and is growing up through that shrub. The honeyeaters are happy to feed on it in the safety of the prickly hakea foliage. 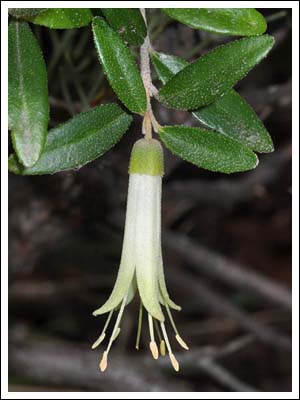 Just a metre away this red flowered plant is growing similarly at the base of Baeckea virgata. 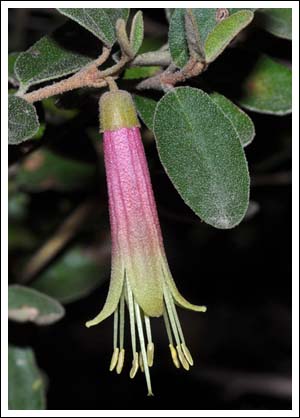 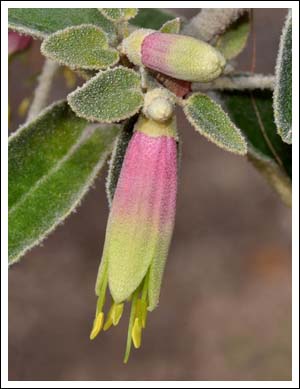 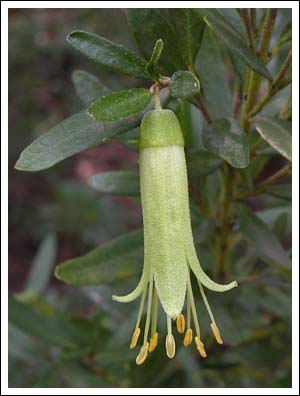 And planted at the same time all those years ago, the red form. 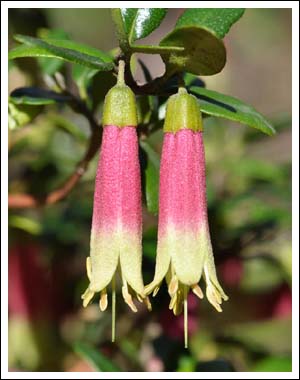 A relatively recent seedling, with a lovely flower. 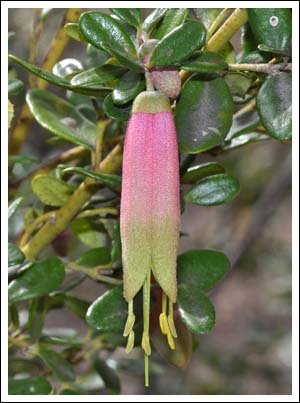 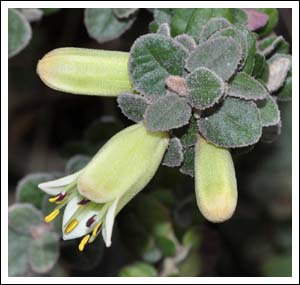 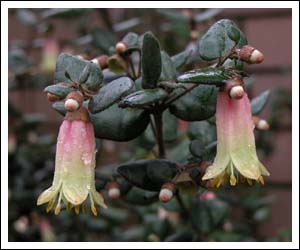 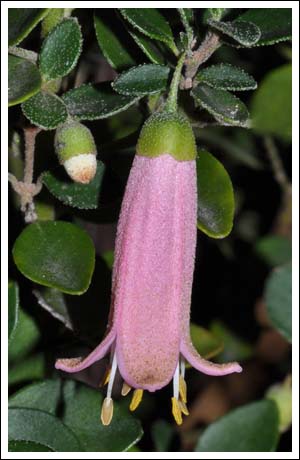 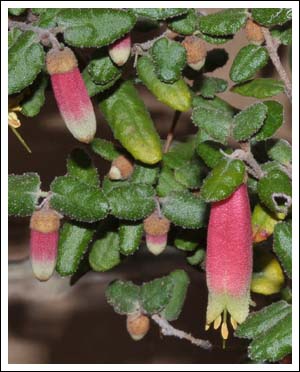 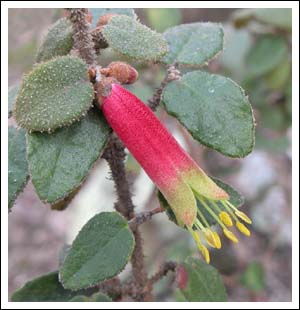 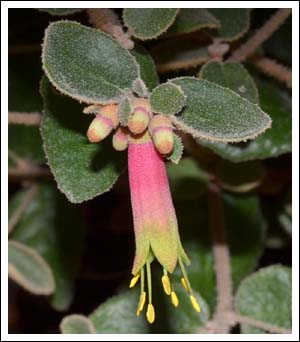 The newest seedling to flower, possibly with Dusky Bells in its makeup. 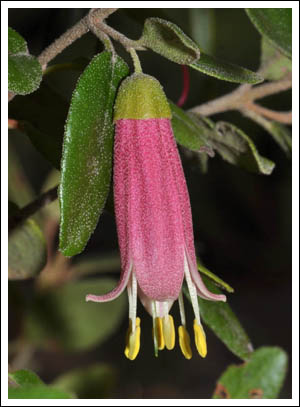 Correa reflexa is extremely variable, both in foliage, and flower shape, size, and colour. This final image is not from the garden, but of a plant surviving on a back lane in farmland just south of the wooded foothills to the north. Another form worthy of cultivation. Click all images to enlarge, and enjoy the beauty of our Australian Correas. 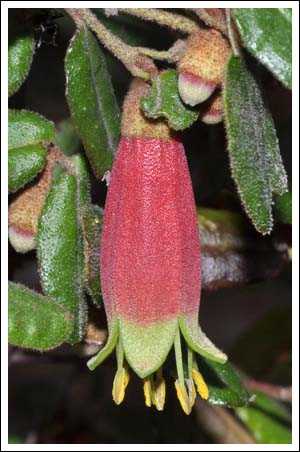 Birds only occasionally feature here, the reason being that bird  photography is mainly done in the native garden, where, depending on the season, our feathered friends may or may not  be present. The summer just past saw the garden lacking in native birds, with Red Wattlebirds  and the resident black and whites about all that could be seen. With autumn now well advanced the scene has certainly changed, with birds back from the bush enjoying what the garden has to offer. The one we particularly look for is the Scarlet Robin, and a pair is back on the fence wires, this brilliant male was snapped into the evening light. 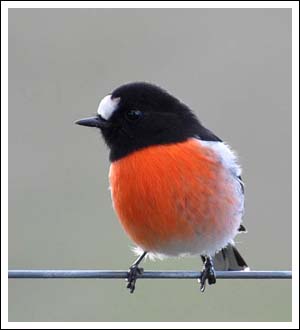 As every photographer knows, it is all about light, and often birds forage in the shade where they are less conspicuous. The male of our wren flock is still in full colour, and he was careful to keep in the shadows while keeping an eye on the photographer. Not a bad thing as it showed up his colour in all its glory. 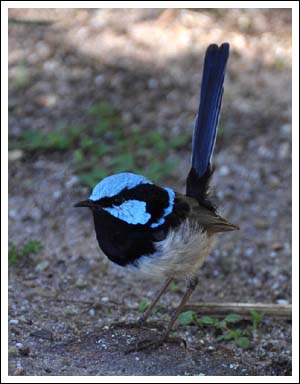 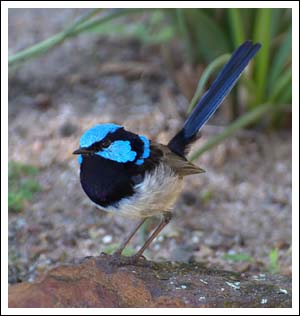 Crested Pigeons are now becoming common in the district, and a recent trip to a nearby property confirmed that fact. This time the light was perfect.

A pair of Sulphur-crested Cockatoos is semi resident and they don’t care about being in full visibility. 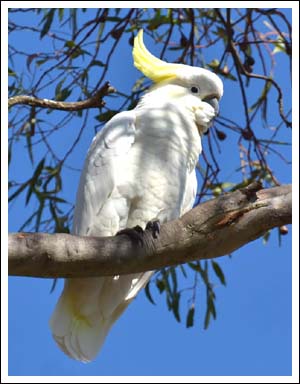 This one though decided it had had enough of the big eye looking upwards. 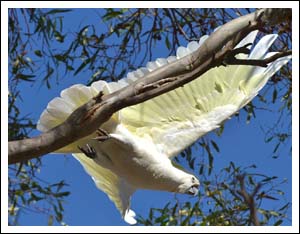 Black-faced Cuckoo-shrikes have been calling in briefly from time to time, they are wary though and keep at a prudent distance in the upper level of the trees. 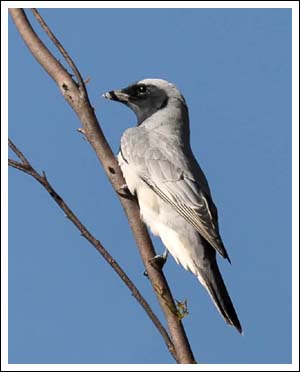 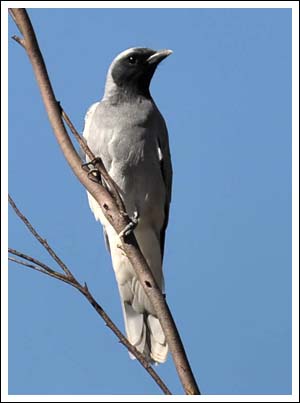 There are two Grey Shrike-thrushes, one quite confiding, the other less so. 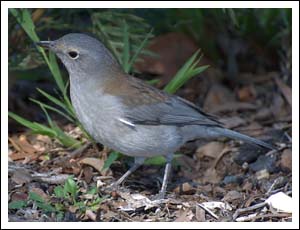 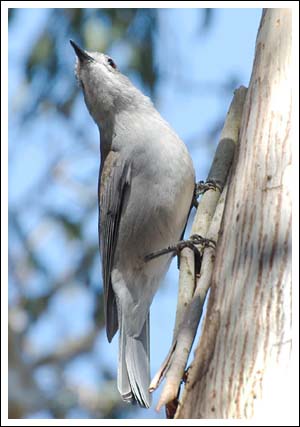 There is nectar available with Hakea Burrendong Beauty in flower, with lots of correas, and a few grevillea flower racemes to satisfy the honeyeaters. New Hollands are about in numbers with the odd Eastern Spinebill. With so much competition the birds are very flighty and hard to nail with the lens, this New Holland in Grevillea Coconut Ice was a distance shot from behind cover. 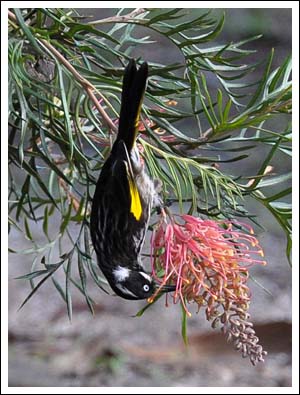